A LEG TO STAND ON
(Published in MDMag/Cardiology)

Clouds of shattered concrete rose above Port-au-Prince after the earthquake.

Injured people fled the city in ancient buses, on donkeys, or being helped along miles of broken roads toward the still intact rural hospital, where I met my friend Dr. Exe.

He looked exhausted and had lost weight since I had last seen him. I pulled him closer and asked hopefully about his family. He looked at me, his face now deeply crevassed: “My house in Port- au-Prince is gone.” He stared sadly at the cracked ground under a nearby Mapou tree and wiped away tears. “Five family members were killed.” Then, turning, he said softly: “My work is the only thing to survive. There is much to do.” We stood silently then for a few moments in the late afternoon. The scorching sun reached for the horizon, silhouetting uncounted people lying outdoors on plastic sheets; the odor of wounds mixed with the dampness of earth and the burning of charcoal.

The small hospital now held 800 patients. Dogs and chickens roamed through the building, lapping and pecking at spilled water and crumbs of food.The stench of filth mixed with rotting tissue forced me to dry swallow and hold my breath. Working as a Vietnam combat surgeon had its dangers, but at least we had decent sanitation and adequate medical supplies. Here there was nothing left. 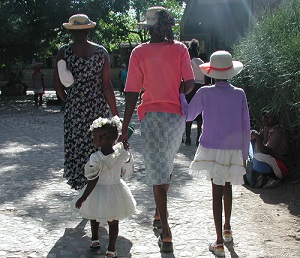 It was strangely quiet as Dr.  Exe presented some of the patients. One young girl, the last one to escape her school during the quake, was injured when falling concrete struck her back. She was alert and smiling, but nothing could be done for her paralyzed legs. Other patients had been caught under fallen buildings and lost arms or legs; some were missing parts of their faces.

Still in shock from losses, relatives gathered around their loved ones and sang hymns after placing Creole Bibles and hymnals beside those most seriously injured.

‘Tis so sweet to trust in Jesus

Just to take Him at His Word
Jesus, Jesus, precious Jesus!
O for grace to trust him more!

A young woman lay partly covered with a white sheet; her fiancé sat in a chair beside her. Other relatives stood nearby. She appeared to be sleeping and didn’t speak or even open her eyes when I touched her cold forehead. In shock from an infected leg, her temperature was 104 degrees. The fiancé said she had been trapped in her home by the earthquake. He had pushed away some of the fallen cement, but her leg remained caught. Finally several people pulled her body more forcefully. She had screamed then, feral and wild. The leg came free, but much of the skin and some muscle tissue had been scraped away on the jagged opening in the house wall.

They were to be married tomorrow, her crying mother said, turning her head away and looking out a window. Others cried with her. The fiancé covered his eyes.

Dr. Exe pulled back the sheet covering the patient’s legs. The right one was twice the size of the left. I carefully loosened several bandages. Most of the skin was missing; the deeper tissues, swollen and red, seeped infected fluid onto the plastic–covered bed. Dr. Exe’s actions seemed stiff and mechanical, different than I remembered. He looked away from the patient. His voice, now soft and mumbled, perhaps enabled him to focus on just one thing at a time, forgetting, as best he could, the tragedy surrounding us.

“She will probably die,” he quietly told the fiancé and the relatives. I started an IV to replace her fluid loss and ordered large doses of several antibiotics. “If she improves, we might save her life with an amputation,” Dr. Exe said, placing several pillows under the swollen leg.

“Doctor,” her mother said. “We want to have our Vodou doctor come to see her. Maybe she has been cursed.”

“Whatever you want,” Dr. Exe said. His face was unreadable, without a trace of displeasure or annoyance. He moved on to the next patient, an old man with a broken leg, but I was still listening to the young girl and her family’s conversations.

“She would never leave her house,” the mother of the fiancé said, looking down and shooing away a mangy dog. Then she turned to the other relatives. “A sweet girl, but now she’ll be a cripple who can’t walk and can’t care for children. And could never have earn money for her family.”

“They have artificial legs now,” the young woman’s mother said.

“Have you ever seen one?” The possible mother–in–law asked, reaching over to hold her hand.

The young woman’s mother cried, burying her face in a handkerchief. “No,” she said.

“Are there any in Haiti? How would we ever buy one without money?”

The mother had no answer. She reached out, palms to the ceiling.

“We’ll leave it in the Lord’s hands,”

I could hear several relatives of the young woman whispering. They had seen the crippled amputees dressed in rags and crouched, begging along the dirt road near the market. Someone brought them each day in carts or they hobbled to the market using tree branches as crutches. Anything would be better than to see that happen to this woman. Better even for her to die, they thought.

Early the next morning, before the blistering heat began, I met Dr.  Exe at the young woman’s bedside. Her temperature was now just 100 and she was awake. Some urine was flowing from her catheter into a bottle on the floor.

Dr. Exe stood near the patient’s feet and looked at her face. “Now we have a chance to remove the infection and save your life by amputating your leg,” he said. “It is the safest way.”

“Don’t take my leg,” she said, tears suddenly streaming from her cheeks. Her family rose and stood beside her. “I would rather die now than live alone and helpless.” The fiancé held her hand and wiped her tears. “There is another life,” she said. “One free of pain. It will be just like behind a veil; a dream that lasts forever.”

Then she continued: “The Vodou doctor came last night. He wore a mask and danced in a red robe to scare away evil spirits.” She took a deep breath. “Then he blew powder on my leg. I feel better. He said he would come tonight again.” It sounded absurd to me. Her improvement had to be from intravenous fluids and antibiotics. Still, I had seen unexplainable cures by those doctors who used small burns and cuts to let out badness.

“Perhaps with antibiotics; if we keep the leg dry; skin grafts.” Dr. Exe whispered, his voice then fading softly. Infected fluid dripped again from her dressings. Dr. Exe spoke again: “The bandages must be changed; the leg must be kept dry.” It would be painful; there was no anesthesia. The patient’s hands grasped the soiled mattress; her eyes narrowed and then closed. Her expression hardened in anticipation.

Someone pushed needles into the skin near her right ear and slowly turned them while I held her leg and Dr. Exe unwrapped the sodden dressings. Relatives and the fiancé stood closely at her bedside. They grasped hands, their voices joining the patient’s as she began singing softly with a series of moans coming from somewhere deep within. A few words were spaced with sobs and the song ended by beginning again.